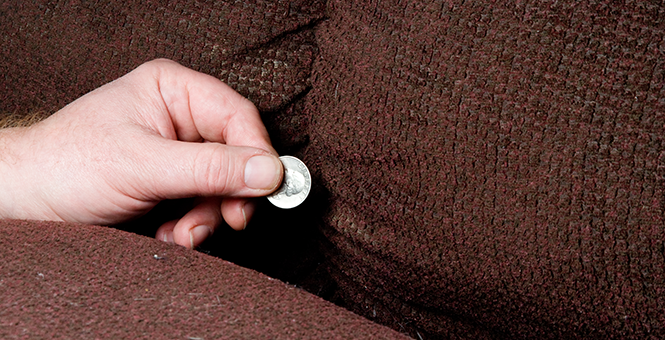 A more formal approach to reviewing your Reporting Employers (RE) Ledger Balances frequently should eliminate surprises when it comes to reporting and reconciling personnel costs.

I had a roommate in college who used to frantically flip through the cushions of our sofa to find some spare change to foot the pizza bill. Although it just seemed like his Thursday night routine at the time, as I creep up ever so gingerly on the ripe old age of 58, I am left with two questions: 1) was this part of his strategic financial plan and (2) how much money did he have in that sofa?

I will dismiss the strategic plan theory, we were a couple of guys trying to squeeze four years of higher education into four and half years, but the second question has been on my mind lately as we hit the height of reporting/audit season. How much money do WE have in the sofa?

When working with clients on disclosures for various Teachers Retirement System (TRS) benefits (pension and OPEB), I typically tie back contributions found on the TexNet transaction reports for deposits made to TRS. When comparing the amounts recorded and deposited by districts during the pension measurement year, we noted the contribution amounts from the TRS spreadsheets were out of kilter by a large amount. Upon further review, after the conversion from TRAQS to the new TRS Reporting Entity (RE) Portal, the district had defaulted on the side of caution and began over depositing amounts into the system to avoid penalties for late deposits. While this method has worked, to avoid penalties, it does cause a bit more work to make sure the reporting for post-employment benefits is correct.

While I always have to swallow hard when comparing these large amounts to sofa change, the amounts are typically immaterial to the financial statements. However, I do believe a more formal approach to reviewing your Reporting Employers (RE) Ledger Balances frequently, as suggested in the TRS October Update, will eliminate surprises when it comes to reporting and reconciling personnel costs. These ledgers can be accessed through the Wage & Contribution tab in your RE Portal by a drop down menu. For more information and helpful tips on reviewing these ledgers, download this document from TRS. TRS recommends that you should be viewing your RE Ledgers each month after your report clears in order to reconcile your ledgers.

So, take a few minutes and review the update to see how that document stacks up against your payroll reconciliation practices. With the penalty grace period reduced to one month beginning in September of this year, it might be helpful to have some cushion, so to speak, in your RE Ledger. You may be surprised to find out just how much you actually have in that sofa.

Who knows? You might even be able to consider it the first step in your strategic financial plan.

Next month maybe we can take a look performing a risk assessment over our control environments by imagining how the after-action report read as it crossed Darth Vader’s desk after the whole Death Star fiasco.